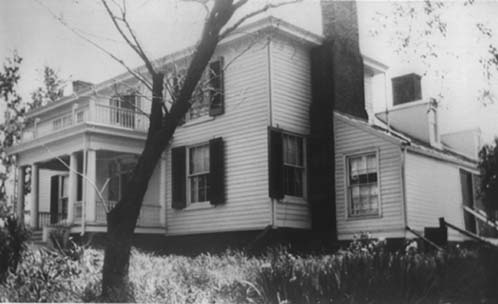 This is a photograph of Cedar Hill, the house built by William Bramblett, Jr., in the town of Bedford, Virginia, in about 1760. It was still standing in 1983, when a Mr. Jack Tibbs purchased it. He planned to take it down, "stick by stick" and rebuild it on a 20 acre tract in nearby Forest, Virginia. I do not know how it all turned out.

The following write-up is part of the Virginia W.P.A. Historical Inventory Project sponsored by the Virginia Conservation Commission under the direction of its Division of History. It is dated September 13, 1937.


Located: (originally) in the town of Bedford, Virginia, on the south side of West Main Street, between Crenshaw Street and Bedford Avenue.

Just what the original house built by Bramblett was like is not known. It is clear, from the architecture, that the present house was built at two different times. It is probable that James Steptoe, the county clerk, made the addition facing the north. In Bramblett's day the front yard, or rather side yard then, for his house faced the east, sloped to the Lynchburg-Salem Turnpike, and the house must have looked imposing to the stage coach travelers who looked up the rather high hill and saw the place among the great cedars, all of which are gone now having been cut down not many years ago to make way for Main Street. Before the turnpike was built the road was known as the County Road, or Bramblett's Road.

The kitchen to the west of the house was made of brick and connected with the manor by a flagstone walk. Still further west was the cemetery, located where the gardens of the Davidson and Parker homes are today. The joist garage is built on the old burial plot also.

No signs of the old kitchen, ice house, meat house or slave cabins remain today. When the County seat was moved from New London to Liberty, James C. Steptoe purchased the Bramblett house and 700 acres of land. During court sessions and at certain other times he and his family occupied the place. He built a brick office in the yard and there kept the count records and did court business. This office was in what is now the Dooley yard. There must have been a large back porch, either originally or built by Steptoe, for it is known that during court sessions the magistrates and their wives held dancing parties "on the large back porch". In the addition which he built there are four large rooms, two on the ground floor with hallway and a like arrangement on the second floor. Of the first rooms both are paneled and one has plaster cornices and central wreath. As the town grew, the Steptoes and later the Crenshaws sold off part of the land for building lots, until today the old house stands on only two lots, where at first it was surrounded by hundreds of acres. When Colonel Crenshaw purchased it, he remodeled the house but made no additions of rooms.