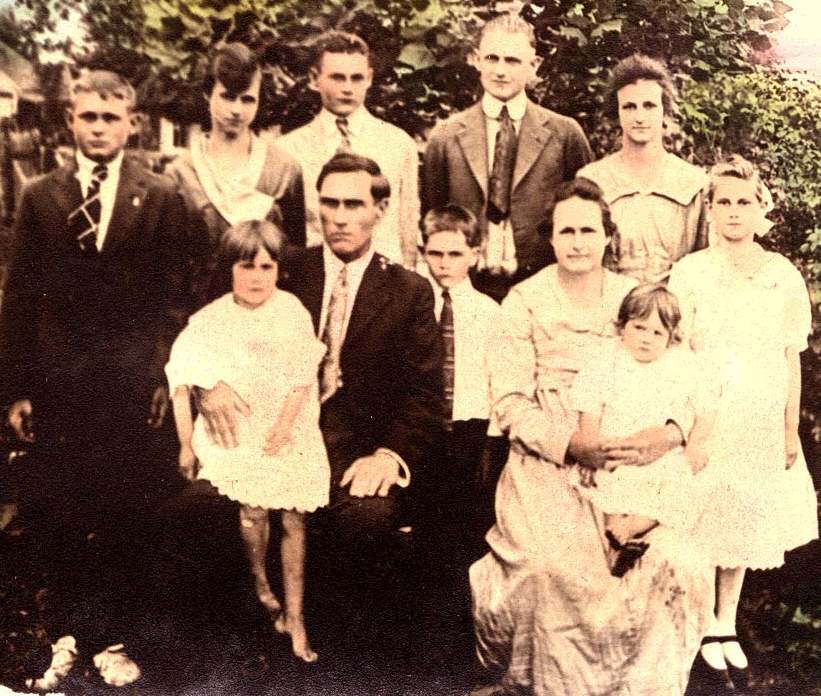 Left to right, in the back row, are Jeremiah Middleton Bramlett, Martha May (Dollie) Bramlett, John Wesley Bramlett (Junior), Jessie Yarbrough and Hollie Yarbrough (Uncle Jess and Aunt Hollie are my grandmother's children from her first marriage), and an unidentified young girl. In the front row, left to right, are Nettie Lucille Bramlett, then her father -- John Wesley Bramlett; then my father -- William Bascome Bramlett standing between his parents, Hettie Ellis Bramlett (my grandmother), and on her lap Hettie (Juanita) Bramlett. I dimly recall from childhood hearing that the unidentified young girl at the right of the picture was a visitor, included in the photo out of politeness. My late step-mother, Josephine K. Bramlett, even with her deteriorated vision, was able to confirm that I have identified Jerry and John correctly. Since my father was born November 24, 1910, and appears to be about six years old in the picture, I estimate that it was taken in 1917. My father dropped the final "e" on "Bramlette" as a young man, so when the picture was taken, the family may have been using that "e" still.