Nora and Buford Bramblette moved to Sully County in February 1926. They rented the Bill Harris farm 12 miles west of Agar where they lived for three years. They had previously farmed near Reliance, South Dakota, using horses for power. However in Sully County,. Buford changed the power source to a Case tractor purchased from Carl Falkenhagen of Agar. Dry years and prairie fires made farming a struggle in those years. It was the custom to "burn off" the stubble fields before starting the spring work. Farmers were often grabbing their shovels, a can or water and "gunny" sacks and hurrying to a fire. General alarms for help went out over the "county part line" telephone.

The Bramblettes brought to Sully County a son, Richard, and a daughter, Chester. Another daughter, Madge, was born July, 1926. The family purchased the Dexheimer farm in Pearl Township which they improved and enlarged through their remaining years on the farm. Many years of extreme drought, wind, dust storms, and grasshoppers plagued South Dakotans in the 1930's. Dust blew and piled at fence rows covering the posts. Grasshoppers ate everything green and parked on the shady sides of fence posts and buildings until there was actually a complete layer of the hoppers.

Time passed and the rains came. Gradually farms were restored to productivity and the farmers were rejuvenated and South Dakota bloomed again.

Buford and Nora lived on their farm until 1946. Buford suffered from arthritis for many years. He moved to Arizona where he lived for nearly five years, passing away in 1954. Nora made her home with Madge and Chester until she passed away in 1961.

Richard farmed in western Sully County and moved to New Mexico where he was involved in real estate and oil drilling. He passed away February 15, 1969. His family lives at Farmington, New Mexico.

Chester Neumann lives in Pierre. She also has a daughter living there and a son in Minneapolis.

It is an interest to note that Clayton Wilcox, a lifetime County resident, purchased the Bramblette "home place" and lived there many years. 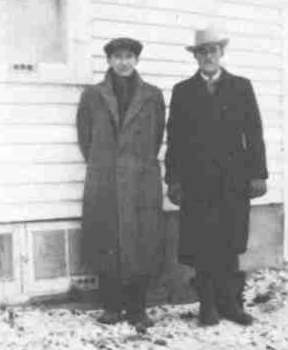